Earlier today, talented developer alephzain described a security vulnerability affecting most if not all Exynos 4 devices, which represent dozen of millions gadget out there.

Unfortunately he also released a working exploit with complete source code before the various vendors affected (Samsung, Meizu and surely others) were made aware of it, leading to a severe security issue without accessible fix for now.

I wrote then an application to circumvent the issue while manufacturer patch the security hole and publish OTA updates.

However, please note its a partial fix that cannot secure completely your device which is to date impossible without modifying it − an operation that will stop the ability to install OTAs without an external tool.

That’s why I would still recommend to consider Chainfire’s solution linked below.

Characteristics of this app: 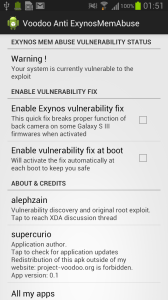 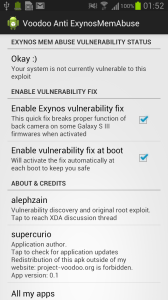